In September 2021, the UN Secretary-General António Guterres released the report Our Common Agenda.[1] The former Swedish Prime Minister Stefan Löfvén leads the UN panel that will provide proposals on how this agenda should be implemented. It is clear that the report comes as a direct response to the declaration about The Great Reset made in June 2020 by Guterres and Klaus Schwab from the World Economic Forum.

Now is the historical movement of time, not only to fight the real virus, but to shape the system for the post-corona era. (Klaus Schwab)

Awaiting us is the total digitalization of the world. This agenda goes hand in hand with the mantra “Build Back Better” which has spread like wildfire among world leaders. 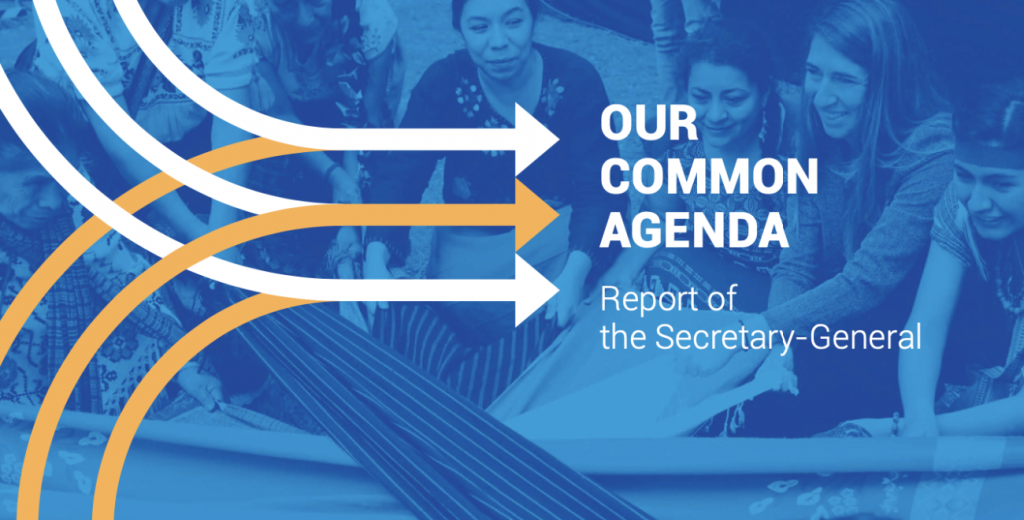 Our Common Agenda contains a number of recommendations on how the UN can be reformed in order to meet the problems facing the world today. Guterres begins the report by describing the serious situation:

We are at an inflection point in history. In our biggest shared test since the Second World War, humanity faces a stark and urgent choice: a breakdown or a breakthrough. The coronavirus disease (COVID-19) is upending our world, threatening our health, destroying economies and livelihoods and deepening poverty and inequalities.

At the same time as Our Common Agenda was released, the UN also hosted The Food Systems Summit and a High Level Dialogue on Energy.[2] These are two areas that have now become a primary concern in connection with the Ukraine conflict and the European Union’s great dependence on Russian and Ukrainian raw materials such as gas and grain. During his speech to the UN agency ECOSOC on March 22 this year, Guterres said:

The war in Ukraine is now causing food, fuel and fertilizer prices to skyrocket, and our United Nations agencies are warning of hunger on an unprecedented scale. The FAO’s (Food and Agriculture Organization) global food price index is at its highest level ever. And according to the World Food Programme (WFP), in the past three years, the number of people on the brink of famine has risen by 17 million.[3]

This is coupled with other crises and problems such as climate change, water scarcity, poverty, violence and discrimination. The picture painted is a crisis of Biblical proportions. If nothing is done, exacerbated crises await in the future. The report also points to “problems” such as failure to reach consensus regarding facts, knowledge and science.

These challenges can only be addressed by an equally interconnected response, through reinvigorated multilateralism and the United Nations at the centre of our efforts.

This specifically refers to how Agenda 2030 and the seventeen Sustainable Development Goals will solve the common problems. This will largely be done through the application of digital technology and the surveillance regime of the Fourth Industrial Revolution.[5]

Therefore, Guterres proposes a summit next year called the “Summit for the Future” with the aim of creating a new global consensus on what our future should look like, and what we can do to secure it.

To this end, an Advisory Committee has been appointed to “to make concrete suggestions for more effective multilateral arrangements across a range of key global issues”. These proposals will be presented at the 2023 summit.

The panel, High‑Level Advisory Board on Effective Multilateralism, was appointed March 18, 2022 and is chaired by former Swedish Prime Minister Stefan Löfven and the former President of Liberia, Nobel Peace Prize winner, Ellen Johnson Sirleaf (2020–2021 she was a member of WHO’s Independent Panel for Pandemic Preparedness and Response). [6] 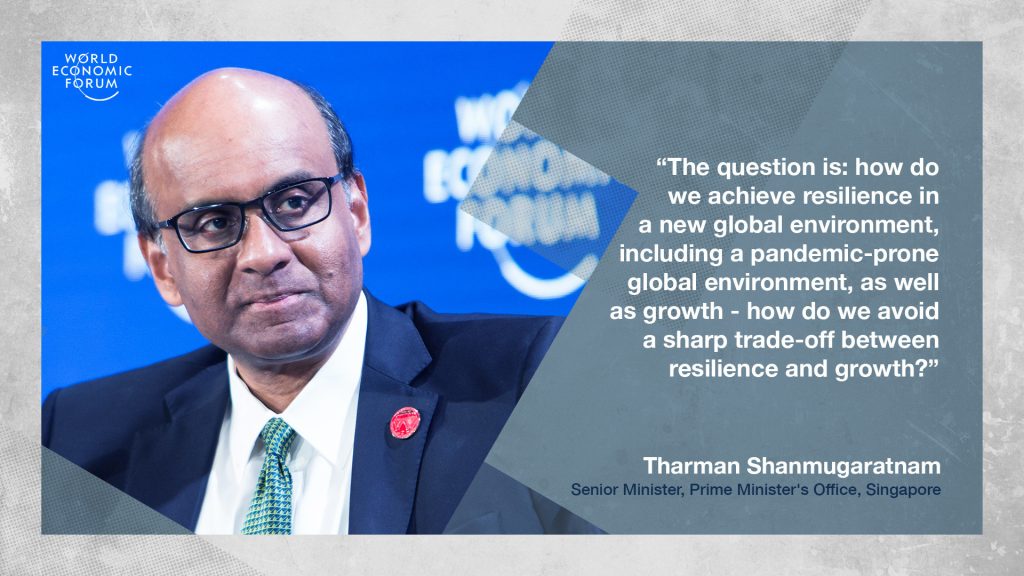 Special mention should be made of Tharman Shanmugaratnam from the Technocratic model country Singapore who is chairman of Group of 30, board member of the World Economic Forum and a member of the G20 High-Level Independent Panel on Financing the Global Commons for Pandemic Preparedness and Respons. Tharman was also chairman of the G20 Eminent Persons Group on Global Financial Governance, which proposed how the G20’s role in the global financial architecture should be changed to create a new international order.

The role of the G20 in the global financial architecture should be reset. It should focus on developing political consensus on key strategic issues and crisis response.[8]

This gives a hint of the direction and the agenda.

But Our Common Agenda also paints a clear picture of the direction in which we are to be heading. An action plan comprising 12 points has been released as a part of the report. The action plan contains proposals that have been discussed for more than a decade. 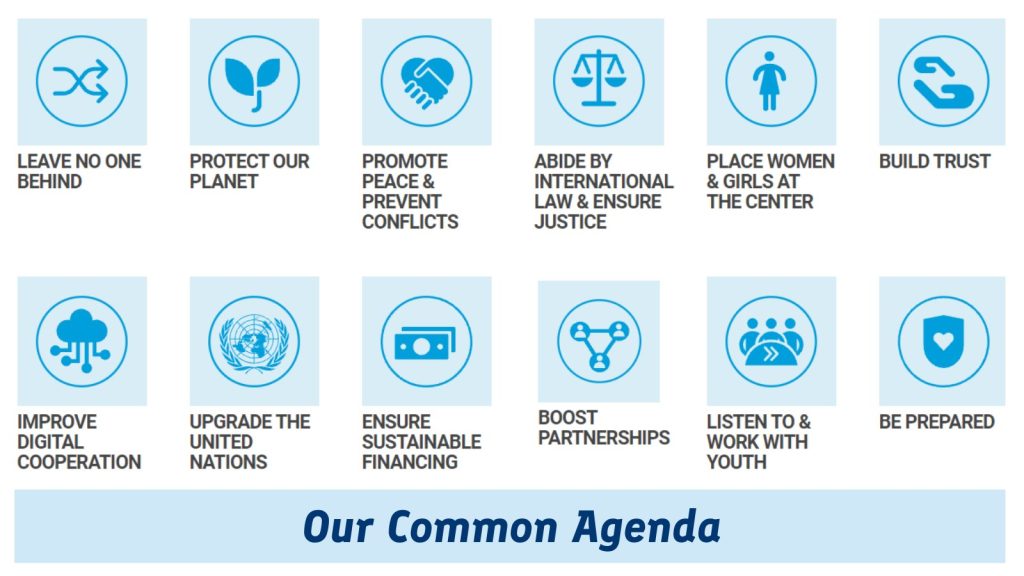 This includes a Global Digital Compact, a Universal Digital ID, an upgraded digital UN 2.0 and closer cooperation between the UN and the G20-system, space technology to monitor carbon dioxide emissions, an ombudsman who will speak for future generations, and the establishment of an “Emergency Platform” as a more effective way to deal with global crises such as COVID-19 and climate change.

The whole agenda is largely reminiscent of the World Future Society’s technocratic ideas from the 1970s and the creation of a “World Brain” to handle the Earth’s processes advocated by futurist Oliver Reiser in his book Cosmic Humanism and World Unity.[9]

What kind of ”world order” are we here concerned with? Surely one obvious distinction is between a loosely organized or ”open” society and a tightly knit or ”closed” society of a totalitarian form of social order. At the present time we have a loose world order, such as embodied in the present United Nations Organization. Those of us who believe in the necessity for a world federation will want us to foster the forces and agencies working toward political and economic integration, thus tightening up somewhat the loose order into a planetary federation of friendly people. (Oliver Reiser)

In the following posts, I will review these proposals and their close connection to the World Economic Forum, the G20 process and the implementation of the Fourth Industrial Revolution and the UN Agenda 2030.

This is the first article in the 13-part series about the 12 commitments in Our Common Agenda:

[8] Global Financial Governance,  The G20 and the IFIs: Making the System Work as a System

8. “Upgrade the United Nations” – Listen in on the people

2 thoughts on “0. Introduction: “Our Common Agenda” – Multilateralism With Teeth”